Prosition of civil society represented by CAN International.
​Climate Action Network International.Parties must collectively ensure that global emissions peak no later than 2015, as in the  most ambitious of the IPCC AR4 scenarios.

​​ Developed countries must increase their pledges to more than 40% reductions by 2020 as part of their fair share to provide a reasonable chance of staying below 2°C, and to keep open the pathway to stay below 1.5°C.

17 Sept 2021 Report of UN Climate Secretariat on
Nationally determined contributions under the Paris​
​Agreement
​​
​
150. “The total global GHG emission level in 2030 taking
​ into account implementation of the latest NDCs is expected
​ to be 16.3 per cent above the 2010 level”.
The 26 Feb 2021 previous report  from the UN Climate
​ Secretariat of Nationally determined contributions under
​ the Paris Agreement Synthesis report by the Climate Secretariat​.
​National shows emissions targets are far above 1.5C or 2C by 2100.

​​Because the science is definite that CO2 emissions must drop to almost zero for climate and oceans stabilization, and that global emissions must decline by and from 2020 for a 1.5C or 2C limit by 2100, these national emissions targets constitu​te a global death sentence for humanity and most life.
The First UN Conference of the Parties to to the 1992 ​UN Framework Convention on Climate Change (COP)  was in 1995. In the conferences governments negotiate on how they would agree to implement the Convention. Over the 25 years of negotiations no progress has been made to a global decline of emissions and instead the Convention and discussions have strayed further away from the clear intention and terms of the Convention.
​
After continuous negotiations up to the 2019 Madrid COP 25 Conference ​​there is no progress on an new climate Treaty or agreement to put global emissions into decline.

Following the failed high expectation 2009 Copenhagen ​Climate Conference the negotiations have adopted terms contradicting the Convention. The 2015 Paris Conference was hailed as a great success, but it was more like a fraud as James Hansen said. With Paris the national commitments of the Convention were weakened to intended nationally ​determined contributions (INDCs), which are just voluntary emissions targets defined as each government likes. Paris has no binding targets.
​
​​Neither the governments of the US nor China, responsible for most emissions, will consider a binding international agreement, meaning they have no intention of a zero fossil fuel of carbon combustion economy

We have no future with today's greenhouse gas polluting economy
Industrialized nations ​​are refusing to even replace the UN Kyoto protocol under which today's emissions are increasing faster than ever, when  to avoid global climate catastrophe they must be decreasing.

​​This requires an all out global emergency response with immediate measures to redress the economic bias towards greenhouse gas polluting industries in order to switch hundreds of billions of investment and public funds to the safe, clean, zero carbon, everlasting energy world economy- the only future we have.

Committed losses today of water food and health for billions of people.​​
We need to address today's committed losses of food productivity at the top of the climate emergency agenda to mitigate the crime against humanity of all time.

Today we are absolutely committed to a global temperature increase of above 2C.

By national 'pledges' of greenhouse emissions cuts we are committed to a 3C (Climate Action Tracker). ​​

So long as it is not acknowledged that we are in a dire state of global climate planetary emergency this crime will be compounded. Today an estimated 300,000 people (the Human Impact report 2009) ​​are being killed every year by increasing atmospheric GHG pollution and unmitigated global climate change. We are committed to a temperature increase three times today's.

​​Almost all these people are the most economically deprived in the world who have the terrible misfortune to live in the most climate change vulnerable regions. These populations are most vulnerable to losses of adequate potable water, food productivity and health.

Today's absolute commitment to global warming and climate change has not been correlated with food security at today's committed temperature increase of 2C ( IPCC 2014 AR5).

Models indicate that for localized small holders, subsistence farmers, low latitude regions and some mid-high latitude Africa regions crops decline by 1.5C. (IPCC 2007). However studies show in fact there is a discernible decline in these most climate change regions at today's 1.1C increase.

The committed temperature increase is in fact somewhat higher because the committed 2C (IPCC AR5) does not include additional warming by positive climate feed backs.
​
The Arctic summer see ice in particular is going fast.  The large loss of albedo sea ice cooling will increase heat waves and droughts in the northern hemisphere harming the world's best food producing regions as well as accelerating the rate of global temperature increase. 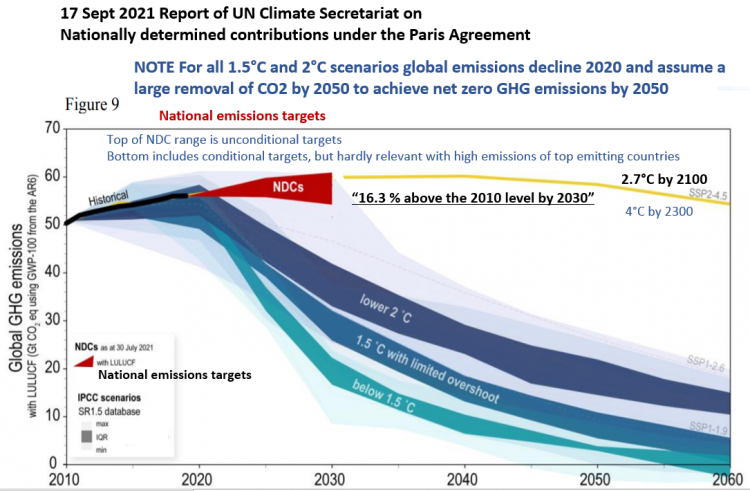