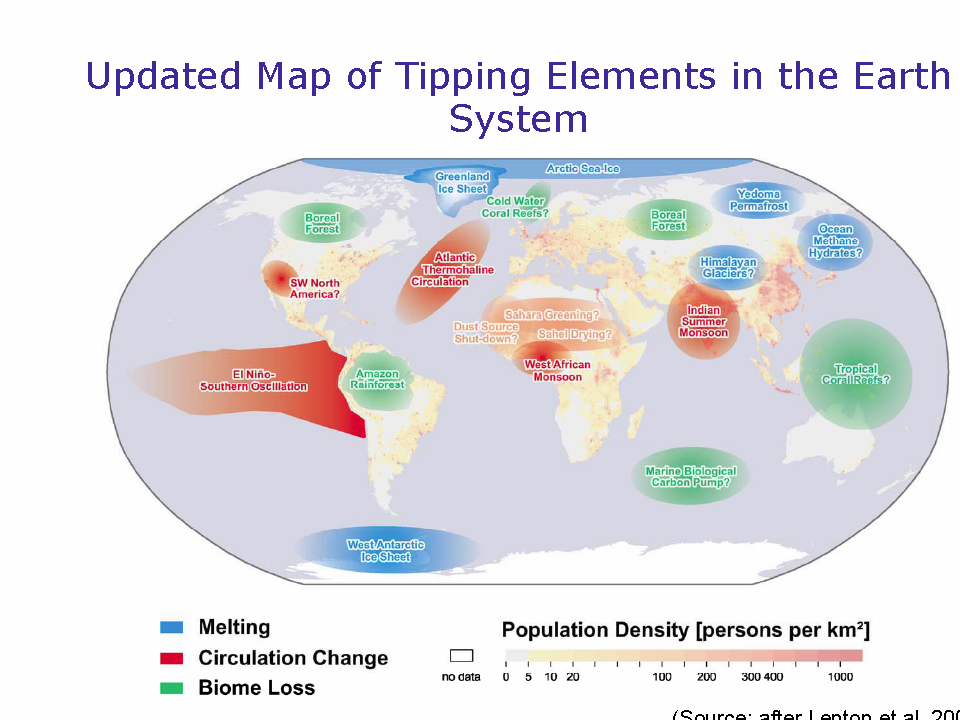 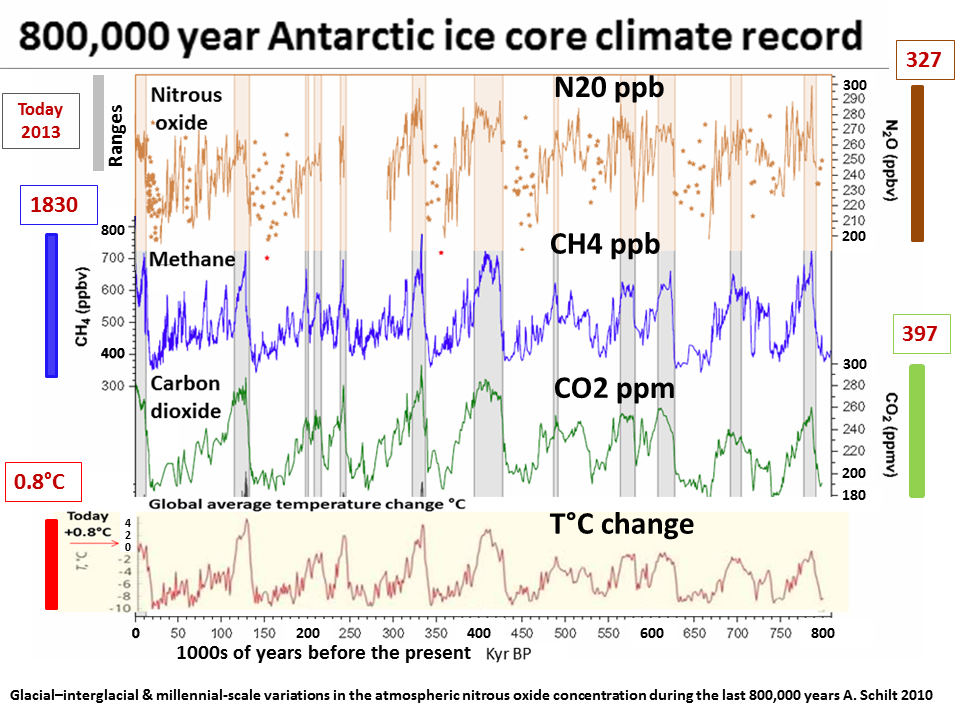 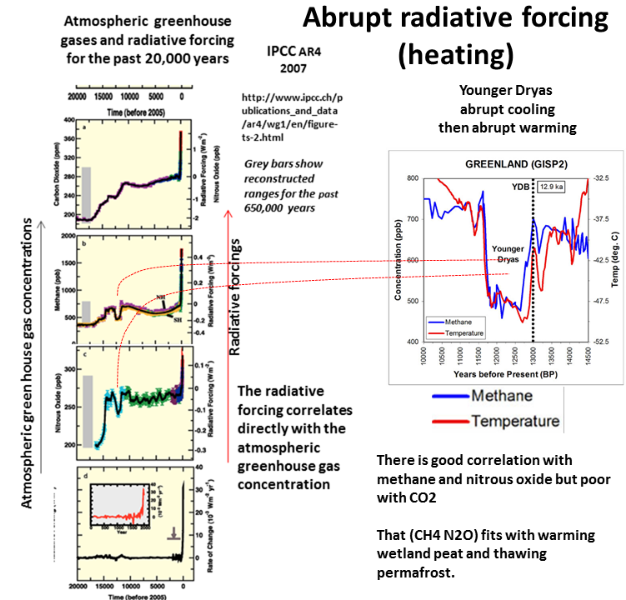 The past climate change heats up PNAS 2000 research paper
Steven M. Stanley
Research  has provided a shocking new assessment of the speed with which major climate changes can sweep across our planet.

​​The most precise evidence of rapid climate change comes from cores extracted from mountain glaciers and from the larger ice sheets of Greenland and Antarctica. Annual layers in the glacial ice provide the chronology and key data on snowfall, temperature, influx of dust, and trace gases from the ancient atmosphere trapped in air bubbles.

Ice-core evidence of abrupt climate changes
Richard B. Alley
Ice-core records show that climate changes in the past have been large, rapid, and synchronous over broad areas extending into low latitudes, with less variability over historical times. These ice-core records come from high mountain glaciers and the polar regions, including small ice caps and the large ice sheets of Greenland and Antarctica.

As the world slid into and out of the last ice age, the general cooling and warming trends were punctuated by abrupt changes. Climate shifts up to half as large as the entire difference between ice age and modern conditions occurred over hemispheric or broader regions in mere years to decades. Such abrupt changes have been absent during the few key millennia when agriculture and industry have arisen. ​​​

The IPCC 2007 AR4 ​ Arctic Ch 15  warned of feedback abrupt change.
'​​​​The possibility of abrupt climate change and/or abrupt changes
​ in the earth system triggered by climate change, with potentially
​catastrophic consequences, cannot be ruled out.
​Positive feedback from warming may cause the release
​of carbon or methane from the terrestrial biosphere and
​oceans which would add to the mitigation required

​​IPCC 2014 AR5 included abrupt references but in unclear language
​Within this century, magnitudes and rates of climate change associated with medium- to high-emission
​scenarios (RCP4.5, 6.0, and 8.5) I.e. ALL BUST BEST CASE pose high risk to abrupt and
​le regional-scale change in composition structure,.... Examples that could lead to substantial impact on
​climate are the ​boreal-tundra Arctic system  and the Amazon forest. Carbon stored in the terrestrial biosphere
​ (e.g., in ​peatlands, permafrost, and forests) is susceptible to loss to the atmosphere as a result of
​climate change, deforestation, and ecosystem degradation (high confidence). Increased tree mortality
​and associated forest dieback is projected to occur in many regions over the 21stcentury, due to increased
​temperatures and drought. Forest dieback poses risks for carbon storage
​
IPCC 2007 AR4 Arctic abrupt refs

​​Climate models cannot predict abrupt or sudden change because  by design their If the projections
​have to be smooth.

In 2002 the national research council of published a comprehensive ​report on abrupt climate change inevitable surprises. A 2004 short report followed. The NRC published another  ​comprehensive report in 2013 Abrupt Impacts of Climate Change ​Anticipating Surprises.
​
​​Abrupt climate change may occur by a triggered tipping point.
​
The faster the rate of today's warming is the less it is possible to adapt to or to control.
Today's warming is sudden is this context.
​​
27 Oct 2015 Catalogue of abrupt shifts in Intergovernmental
​ Panel on Climate Change climate models


​​​​​The oceans are the ultimate determinant of climate. Ocean heating is clearly abrupt (2017 research finds it the highest in the past 100 million years. Ocean acidifcation is abrupt. Arctic warming is clearly abrupt and so is northern hemisphere warming, but these are not recognized as such. There is clearly an abrupt cooling of the North Atlantic, due to Greenland melt water.

​​​The real question is do today's record high atmospheric GHGs have the world committed (locked in) to actual abrupt catastrophic impacts to the planet. There is evidence from amplifying feedback science that this is the case.

The most recent and dramatic example is the Younger Dryas ​​13,000 years ago, of abrupt cooling terminated by an abrupt warming of 10C in a only a few decades. The sudden warming is attributed to methane and CO2 from wetlands and thawing permafrost.

The ​​IPCC AR5 : a large-scale change in the climate system that takes place over a few decades or less, persists (or is anticipated to persist) for at least a few decades, and causes substantial disruptions in human and natural systems. There is information on potential consequences of some abrupt changes
​​The planetary catastrophic risk of abrupt climate change has been recognized for many years
​ In 2002 the us National  Academy published Abrupt Climate Changes: Inevitable Surprises

​​
​​
In 2013 an update report (extracts below) from the US National Academies was published Abrupt Impacts of Climate Change
A study of Earth’s climate history suggests the inevitability of “tipping points”— thresholds beyond which major and rapid changes occur when crossed—that lead to abrupt changes in the climate system. The history of climate on the planet—as read in archives such as tree rings, ocean sediments, and ice cores—is punctuated with large changes that occurred rapidly, over the course of decades to as little as a few years. There are many potential tipping points in nature, as described in this report, and many more that we humans create in our own systems. The current rate of carbon emissions is changing the climate system at an accelerating pace, making the
chances of crossing tipping points all the more likely.

​​The question is now whether the surprises can be anticipated, and the element of surprise reduced. That issue is addressed in this report.

ANTICIPATING SURPRISES
The abrupt climate changes and abrupt climate impacts discussed here present substantial risks to society and nature. The ability to anticipate what would otherwise be “surprises” in the climate system requires careful monitoring of climate conditions, improved models for projecting changes, and the interpretation and synthesis of scientific data using novel analysis techniques. In light of the importance of actionable information about the occurrence and impacts of abrupt changes, it is the Committee’s judgment that action is urgently needed to improve society’s ability to anticipate abrupt climate changes and impacts.
​
To address these needs the Committee recommends development of an Abrupt Change Early Warning System (ACEWS). Surprises in the climate system are inevitable: an early warning system could allow for the prediction and possible mitigation of such changes before their societal impacts are severe. Identifying key vulnerabilities can help guide efforts to increase resiliency and avoid large damages from abrupt change in the climate system, or in abrupt impacts of gradual changes in the climate system, and facilitate more informed decisions on the proper balance between mitigation and adaptation. With adequate scientific monitoring and study of these potential changes to the climate system, the probability that society can anticipate future abrupt climate changes and impacts will be substantially increased.
12 Oct 20​15 Catalogue of abrupt shifts in Intergovernmental Panel on Climate Change climate models. 'Eighteen out of 37 events occur for global warming levels of less than 2°'
​
​The US under the Department of Energy has a special research project called the Investigation of the Magnitudes and Probabilities of Abrupt Climate TransitionS (IMPACTS) Project. It addresses four abrupt situations.
It is quite a contradiction to expect unpredicted abrupt change to be somehow predictable, and even if we could predict an abrupt even by the very nature of abrupt climate change, there is nothing we could do about it.

The 2013 assessment has concluded that the threat from abrupt climate events this century is less than had previously been feared, but ​​this relies on computer models and climate models inherently do not capture sudden non linear change.

​​Some abrupt changes that have been widely discussed in the literature because they were previously considered to be potential threats with poorly known probability. More recent research findings have shown that they may be less likely to occur within this century than previously considered possible. These include disruption to the Atlantic
Meridional Overturning Circulation (AMOC) and potential abrupt changes of high-latitude methane sources (permafrost soil carbon and ocean methane hydrates). Although the Committee judges the likelihood of an abrupt change within this century to be low for these processes, should they occur even next century or beyond, there would likely be severe impacts. Furthermore, gradual changes associated with these processes can still lead to
consequential changes. Thus, they merit further study.
Summary chart of abrupt climate situations and assessment 2013.
New Research
By date​


​​​Reducing abrupt climate change risk ..
Mario Molina 2009.
Current emissions of anthropogenic greenhouse gases (GHGs) have already committed the planet to an increase in average surface temperature by the end of the century that may be above
the critical threshold for tipping elements of the climate system
into abrupt change with potentially irreversible and unmanageable
consequences. This would mean that the climate system is
close to entering if not already within the zone of ‘‘dangerous
anthropogenic interference’’ (DAI).
Abrupt cooling End Younger Dryas- to abrupt warming 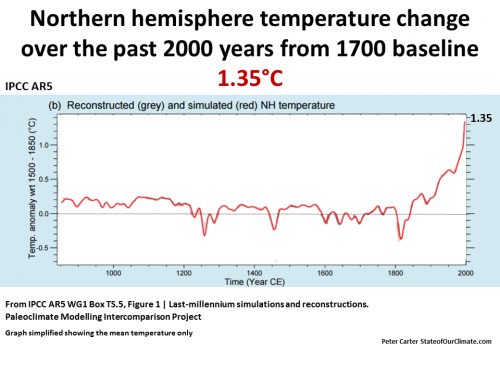 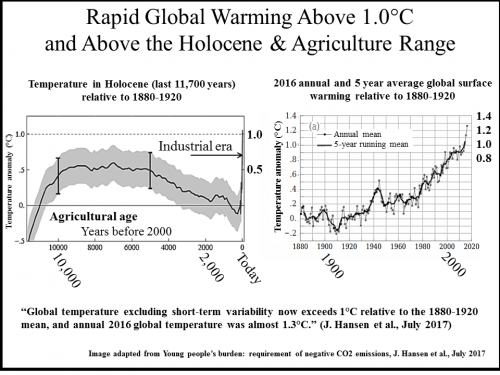 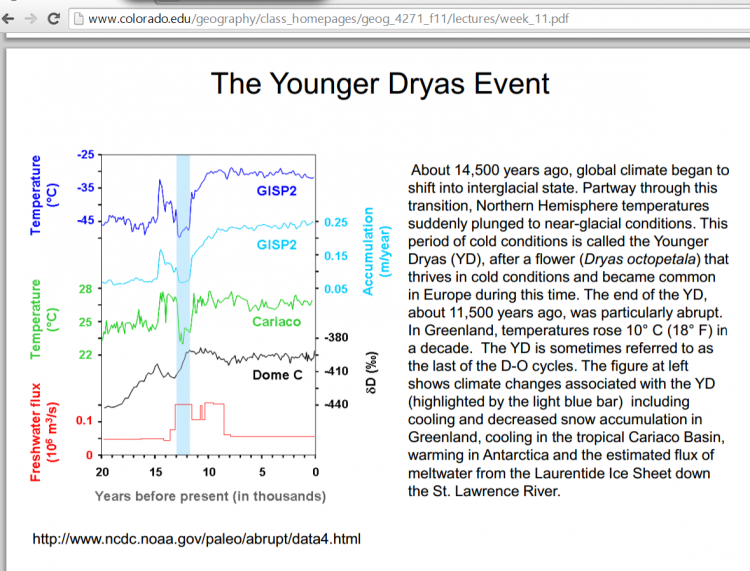 July 2020 Current abrupt Arctic warming risks abrupt global heating. The most recent and dramatic example of abrupt (as sudden)climate change is at the end of the abrupt 'Younger Dryas' cooling ​​13,000 years ago. Greenland ice cores showed  this was followed by a Northern hemisphere sudden huge warming of 10C in o​nly a few decades. The sudden warming is attributed to methane and CO2 from wetlands and thawing permafrost, but nitrous oxide is also linked (IPCC AR4) .That makes today a global planetary emergency situation.

​​Today's sudden decline in Arctic summer sea ice cooling is expected to cause abrupt climate changes outside of the Arctic (Holocene warming marked by abrupt onset of longer summers ..., P. A. Mayewski, 2013).
CO2 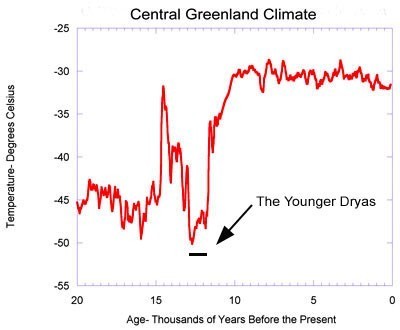 Our agriculture based civilizations are only a go back about 5000 years and the earliest very small scale agriculture about 10,000 years, which is the Holocene. Agriculture is totally dependent on a stable climate. Today's global warming of a couple of hundred years r is extremely sudden. ​​
​
​ The sudden temperature spike now is up to 1.1C (2016) is abrupt, and is above the global temperature limit of the Holocene.

Today's global warming over the past 50 years is sudden in terms of the past 2000 years. ​​

End Younger Dryas Abrupt Warming: 10C in a few decades!
We know abrupt warming and cooling can happen because they show up in the ice cores. A particularly recent (in climate history​ terms 11,500 years ago) and extreme example is the Younger ​ Dryas abrupt cooling and abrupt warming event. Research finds​ the warming was 10C over just a few decades. The cause was methane emissions. Research by Prof Nisbet has shown that ​NH wetland methane was involved and also methane hydrate​ may have played a role.​​The Greenland and temperature increased from about -50C to -35C. More than Greenland average temperature is -18.5 (from 1850-2015). A 2012 study Younger Dryas cooling and the Greenland climate response to CO2, ​Zhengyu Liu, 'suggests that climate sensitivity as assessed from ice core records may underestimate the severity of rapid regional warming over Greenland in response to present and future anthropogenic greenhouse gas emissions.'
​
​
​​The atmospheric increases of all three main greenhouses are clearly abrupt. In particular atmospheric CO2 is accelerating faster than ever (2017) at a rate without past precedent (WMO 2017).
​
​There is no question that today's abrupt atmospheric greenhouse gas levels have led to a dramatic obvious sustained abrupt accelerating radiative forcing (heating) of the biosphere (see: dramatic graphs from the2007 IPCC asessment). This is a most policy relevant definition of abrupt climate system change.